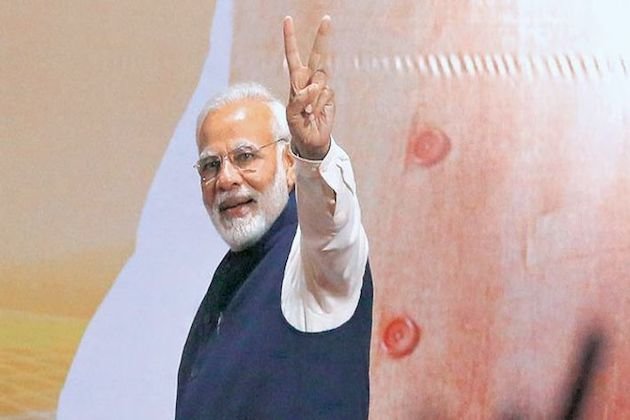 Official data from India's Election Commission showed Modi's Bharatiya Janata Party (BJP) ahead in 292 of the 542 seats available, many more than the 272 seats needed for a majority in the lower house of parliament.

That would give it the first back-to-back majority for a single party since 1984. The main opposition Congress Party was ahead in 51 seats, figures showed.

An outright majority for Modi's party will likely embolden Hindu groups, who want to assert their dominance in the country, to the alarm of minority Muslims.

It would also allow Modi to push ahead with reforms to combat unemployment and rural distress that have persisted during his five years in power.

The mood was upbeat at BJP headquarters in New Delhi, with party workers cheering as TV channels reported a growing lead.

"It's a huge mandate for positive politics and the policies of Narendra Modi," said GVL Narasimha Rao, a BJP spokesman. "It's a huge win for India, we are humbled by the magnificence of this victory."

"It's obviously not in our favor at all," said Salman Soz, a Congress spokesman. "We need to wait for the full results but right now it doesn't look good."

The National Democratic Alliance (NDA), led by the BJP, was ahead in 324 seats, with the opposition United Progressive Alliance winning in 111, after 10 a.m. (0430 GMT), about two hours after the counting of about 600 million votes began, Indian TV channel NDTV said.

NDTV and rival channel CNN News 18 have called the election for Modi's alliance.

The NDA's predicted margin of victory is much larger than surveys indicated in the run-up to the vote, when most polls showed it would be the largest alliance but would fall short of an overall majority.